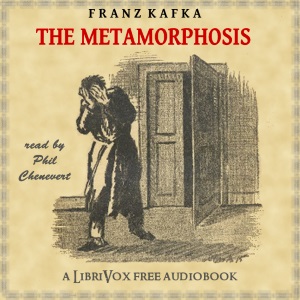 LibriVox recording of The Metamorphosis (version 4) by Franz Kafka. (Translated by Ian Johnston.)
Read in English by Phil Chenevert
This story, about a man who wakes up transformed into a bug and the repercussions it has on his life and the people around him, has intrigued me for many years. The translation is by Ian Johnston, not the translator that is in Gutenberg; I like Johnston's more. What does it mean? [Spoiler possibly]In my mind it is not complicated at all and is most probably an autobiography of how Kafka himself had experienced his early life living with his parents. Kafka describes how he had experienced his parents’ financial and emotional exploitations of him, to the point of detaching from them and thereby ceasing to be their son (the real metamorphosis). Gregor’s metamorphosis is that of Kafka’s being an obedient son, subserviently paying for his parents’ narcissistic needs with his own life, into being a disobedient one—as if he had become a ‘piece of vermin’. Gregor’s parents possessed a large sum of money in savings, which symbolizes the needlessness of Gregor’s exploitation. In other words, the parents did not love him for who he was, but for his loyal willingness to undergo this exploitation. Reduced to vermin, Gregor can (or will) no longer financially benefit his parents. It is the parents that caused Gregor’s/Kafka’s metamorphosis. The debt Gregor intended to repay his parents symbolizes the emotional debt many adult children continue to feel towards their elderly parents for the love and care they have provided. Sister Grete, at first siding with her brother against their unfriendliest father, eventually switches sides after her brother’s metamorphosis, conveniently seizing first place in the sibling hierarchy, a reference to Kafka’s relationship with one of his siblings. The reason why the book continues to enjoy popularity among large audiences of readers, in my opinionm is because they recognize themselves in Gregor Samsa, which makes it all the more astounding how many ‘expert’ interpretations attempt to distract students of Kafka away from the most likely one. I know that some of our absolute best LibriVox readers have already recorded this marvelous story but this but it has also been on my list of "yearn to record" things for a long time and for my personal and entirely selfish pleasure now is the time to do it before I get any older or another flood hits us.
For further information, including links to online text, reader information, RSS feeds, CD cover or other formats (if available), please go to the LibriVox catalog page for this recording.